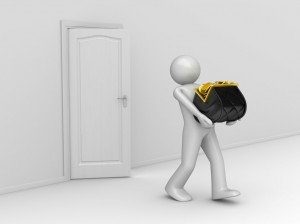 Most people think they need a huge stash of cash that is well invested to ensure that they have sufficient funds to retire on. The fact of the matter is that you do not need a million to retire even though this is counter to what most investment advisers would suggest. They do the simple calculation of looking at the income you feel you need, and use the prevailing expected interest rate income to calculate how much is needed. For example if you want $75,000 income during retirement each year, with $35,000 coming from pensions, then $40,000 must come from your investments.

If you use the approach that the advisers suggest at today’s interest rates of say 3%, then you would need to have – $1.4 million saved for retirement and your portfolio would need to be fully invested earning 3% on average. If you began early enough you might have saved this much, but most people start late and do not save nearly enough. How will you get by in retirement.

You do not Need a Million to Retire – need less Money?

If your income is $75,000 today, do you really need the same amount in retirement? Chances are you will not, since you are not commuting to work every day and you have more time to do some of things that you might hire someone to do for you. Everything from dry cleaning to down sizing to one car costs less. Lets assume that you only need $65,000 to live on instead of $75,000. Now using the same assumptions as before regarding pension income you only need $30,000 extra income and save -$1.0 million. Still high!

You do not Need a Million to Retire – Interest Rates

Interest rates have been low for the past 5 years. They areÂ  starting to rise at the time of this update. However if you are laddering your investments, you will be able to invest your maturing funds at higher interest rates. Let’s assume you can increase your average interest income by half a percent to 3.5%. The impact is to reduce the money you need to save down to $860,000.Â  Interest rates can have a major impact on your income and it is important to pay attention to this number.

You do not Need a Million to Retire – Fees and Charges

Another area to pay attention to is the fees and charges you pay for having your investments managed for you. Keep these to a minimum. these dollars are better in your pocket than your advisers.Â  Mutual funds charge half a percent or as much as 2% if you live in Canada. Get out of mutual funds and increase your income.

There are numerous ways to live on less than a million in savings, provided that you pay attention to the details. Make this your new job and you can expect to have more money to live on than you thought.

1 thought on “You do not Need a Million to Retire”