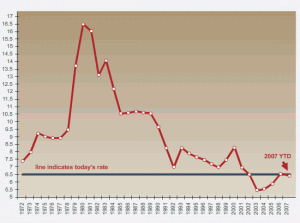 We decided to select our first topic,Â Stock Market Volatility and Retirement, based on what is going on this week in the world’s stock markets because the volatility affects so many people. We are not stock market experts, just a writer that is informed and giving our own opinion.

The market has seen some pretty wide swings both positive and negative in the world’s stock markets. In fact the markets have been declining for the past few weeks, and now they are on the upswing as we reach the end of the year. Some groups blame it on the downgrade of the US Governments ability to pay their debt, while others blame it more on European Union difficulties, particularly with Greece, Italy, Spain and Ireland.

In our opinion it is really none of these. It is a combination of speculation and fear, along with an ongoing proven inability of our worlds politicians to manage their budgets and perform in a reasonable business like manner. Was that a mouthful or what. Lets look at each issue in some more detail. If you disagree that is fine. We would love to hear your opinion as well.

Warren Buffet was recently quoted as saying “The lower the equities go, the more he buys”. Well that sums it up, every time he buys a few million shares of some company the action drives the stock up and many other buyers jump in. There are a few people who really know what is going on, they are big enough to affect the market and the rest of us follow like lemmings to the slaughter. We believe that there is tremendous speculation going on right now in addition to fear which is the next major issue. But rest assured that those people in the know, with lots of money and steel wills are making a killing as the market tumbles one day and rises the next.

What we all want is a stable market that does not fluctuate a lot and pays us dividends over time etc.

This is the other major issue that is going on right now. Fear is always in the market and causes people to do irrational things. But with these swings, with the governments around the world unable to deal with their debt issues and people worried about their retirement, fear has taken over and many people and companies are moving more and more funds to a cash position.

I recently read an article that the major US companies are in much better shape than they were in 2008, because they have lots of cash stored away. In fact they have coined a new term called a “fortress balance sheet”. Not only are companies doing this, but individuals are as well. Fear is what is driving this, worry about your savings, worry about retirement and worry about losing everything. The speculators are having a field day with the swings that are going on, all caused by fear!

What is causing the fear and the speculation? Some would say it is our poor economy not bouncing back. In our opinion it is the politicians not making decisions and not operating like a business would. Too many bureaucrats overall. If the government operated like a business, we would have balanced budgets, we would only have enough people on staff to do the job and the minute they were not needed they would be laid off. Sounds tough but that is what needs to be done if you want to have a balanced budget and not have the huge debts that just about all governments are plagued with.

Add to this the fact that they cannot make a decision as shown in the US recently and some European governments and you have the recipe for fear to go up, gold to go up and just about everything else going down.

Will it keep going this way, let’s hope not. Maybe the politicians will wake up and get it right next time around! We can always hope. In the mean time if you are nearing retirement, hang in there. Stick with good quality investments that allow you to live on the income. No use in selling low, and locking in some of the losses that have recently appear in the market!

That is our opinion, constructive comments appreciated!