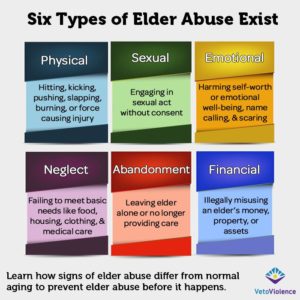 What are the signs and symptoms of baby boomer elder abuse? They are many. Anyone who is providing care, or is a friend or a family member of the senior needs to be on the alert. Often the most visible are bruises that really should not be there. Falls take place sometimes causing broken bones. When someone falls, they can cause bruises as well. But if there is no fall and the senior you are visiting has a lot of bruises, investigate what is going on.

Another common form of elder abuse is financial, which is the focus of this web site. Financial abuse takes place when there is outright stealing. Seniors pay for things that they really should not pay for or they are paying too much for many items. Often care givers, whether they are family members or not, cannot resist the monetary attraction. Relatives should jointly monitor the seniors funds. They need to make sure that their savings are not being prematurely spent, leaving them destitute.

From a Financial Perspective

Uncovering financial Elder abuse is difficult. Regardless of the amount of savings and investments that a senior might have, family members should always monitor what is being spent. Investigate unusual amounts or one time large amounts that you are not familiar with.

More than one person should check accounts and spending levels. Money can corrupt no matter who it is. Two people, must monitor accounts. There will be less chance of collusion and financial elder abuse.

Elder financial abuse can come in many different forms.

One time while cutting my father in-laws lawn, a person drove in to the yard. He indicated that he was here to collect the monthly fee for the newspaper. The amount was around $45. I asked him how long he had been delivering the paper? How long he had been collecting cash from my father inlaw? This gentleman was around his mid 40’s. He saidÂ he was relatively new, but it had been several months since he started collecting.

He gave me his name and his license number. Then I informed him that I had prepaid the subscription for the paper. He quickly realized that the jig was up. He left before I could say much more. What a scumbag. Taking money from the elderly. It was a small amount but still it makes him a scumbag.

I called the news paper. The news paper fired him. However he likely has continued ripping seniors off and is taking money from unsuspecting seniors.

The point of the story is that everyone must be alert. There are thieves everywhere. The elderly are particularly vulnerable. If you have an elder person you are close to, help protect them.

Many baby boomers, born between 1945 1954 are now retiring. Although the financial advisor community, banks and government have talked about building sufficient retirement savings to cover them during retirement, many do not have sufficient funds Â to take them through retirement. On top of that there seems to be in increasing level of baby boomers elder abuse that is taking place. As more and more baby boomers move into their late retirement years this is becoming an increasing problem.Â  The chart summarizes the various kinds of elder abuse that takes place. Often the most visible or those of physical abuse. But there are five other types of abuse, including financial, verbal, emotional, neglect and even abandonment. How can people be so cruel and treat their elderly family members this way? How can care workers treat people this way?Â  It can be a terrible thing to experience this kind of abuse. Having lots of money does not always protect you either.

Elder abuse abuse in our Community

Unfortunately in our society everything is driven by sex and money. If it is not sexual abuse, it is some form of abuse that is triggered by the greed of grabbing their money. Sometimes it is the fact that they don’t have enough money to pay for the services that seniors need. We cannot emphasize enough that baby boomers planning to retire Â need to make sure that they have sufficient funds to pay for top quality care during their later years.

There are the obvious criminal cases that can be dealt with when someone is exposed to physical abuse and the perpetrator is caught and prosecuted. But there many more subtle situations that are never deal with that trouble many seniors today. Elder abuse is rampant and in many cases it is our own family members that are the guilty ones.

What about the son or daughter who slowly drains their parents bank accounts leaving them destitute and abandoned? What about care givers who are rough in their treatment? They never leave bruises, but you know that there is something going on. Then there are situations where they get the parents to pay for everything. The kids could even be well off.

Abandonment is one of the worst. Not everyone wants to look after someone who is old and frail. They may not have the patience and the personality. The senior ends up living by themselves and living as best they can until they cannot look after themselves any longer. They depend on the good will of neighbors who take pity. Where is the family in this situation?

Knowing that this is going on will at least help seniors takes steps to prepare for this situation. Plan now how your frail years will be to ensure that they are as good as they can be. We are going to write a series of posts on this subject so stay tuned. 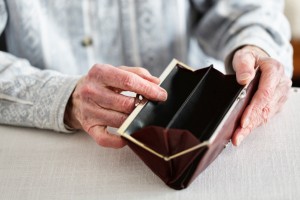 Most people are surrounded by a caring and loving family. As a result, the chances are that elder abuse will not be an issue for these people. On the other hand, many people are still taken advantage of by family members as well as scam artists. But the banks can help in a number of ways. Further with baby boomers aging banks failing to stop elder abuse in a financial sense is a real issue. The banks are assessing adding safeguards. They will monitor unusual amounts of money being withdrawn from accounts. They can alert appropriate people. As a senior, you have to tell the banks who they should contact and when. Above all there is a part for the senior and the caregiver to play here as well.

While the banks figure this out there are a number of things that individuals can do. First you can manage abuse of your own accounts or on accounts that you are managing for someone else. For example, all banks now offer email alerts that can be set at various thresholds. An email is sent to the specified address any time this threshold is exceeded.

This is an excellent way to keep track of what is going on in someones account if you are a caregiver. As a senior you may want to have more than one person manage the account. Moreover, this will help to avoid temptation for a single caregiver.

Make sure that there is a living will that specifies who can manage your affairs if you are incapacitated. Set up the safeguards as mentioned to avoid being scammed. Or finding that all of your money has been removed by someone who you trusted. Tell the bank who this person is. Add controls on the account to avoid large sums of money being removed without your knowledge.

Take control of the elder abuse possibility yourself. Avoid becoming a victim.

For more details about managing your lifestyle as we age, click here.

Elder abuse can come in many different forms. In some cases, it is a failure to provide adequate care, while in others it is actual physical abuse. But there is another form of abuse. This is where banks and elder abuse come together. Also where they can make a difference. Financial elder abuse can come from scams that are perpetrated by 3rd parties on confused seniors. They somehow persuade them to part with large sums of money. In other cases, it is the actual family members who have responsibility for the senior’s financial affairs. It may be a son or daughter or a relative that just cannot resist taking some of the money out of the bank for their own personal use.

There are a number of ways that the banks, as well as individuals, can protect themselves from this sort of financial abuse. The banks are gradually putting systems and triggers in place. These alerts will alert them when large sums are removed from an account. Also, abnormal amounts that do not fit the profile of the account owner can also trigger alerts. But there are more ways than you can protect yourself as well as your elder family member.

We will list a few steps that consumers can take to protect themselves. This applies to the senior as well as the person responsible for looking after their accounts. It is not foolproof, but it is a step in the right direction.

Living Will – make sure that there is a living will that specifies at least two people who will look after health decisions and financial decisions. Make sure the bank is aware of the living will.

Account Alerts – emails can be sent based on triggers of both deposits and withdrawals to the designated living will executors and the senior in question, providing information about activity taking place in the account.

Monitor – Check online at least once a month and more often to make sure that nothing suspicious is going on with the account’s finances.

Place Limits – on the account in terms of transactions. Anything larger than a specified amount triggers a phone call to the executors or the account owner for approval.

Make good decisions regarding your living will executors. There is a much higher probability of avoiding elder abuse. For more details on personal finance issues, click here.