Small animal traps for pests such as groundhogs, raccoons, squirrels, and even skunks can be humane and safe for the homeowner as well as the animal you are trapping. There are some interesting areas that consumers should be aware of if they are planning to employ a small trap to catch something that has been bothering their landscaping or gardens. 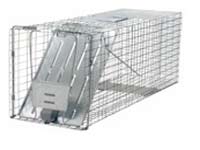 Small animal traps come in various sizes, however, the one we bought was about 12 ” by 12″ by 36″ made out of wire mesh and needed assembly which was not too difficult. This particular small animal trap has a trip platform on the floor of the trap which when stepped on causes the door to slam down trapping the animal inside the trap. Any bait should be located at the far end of the trap so that the animal has to go far enough to step into the trip platform locking them inside. These are pretty easy to use and have a handy carrying strap located on the top of the trap for ease in carrying the small animal trap.

We purchased the small animal trap at Home Depot initially to trap several raccoons that had invaded our attic( more on that later), however, they can be used to also trap such animals as groundhogs and skunks or rabbits. I am not sure I would want to trap a skunk, since it is a bit tricky to open the door of the trap to let the animal out and who wants to get sprayed by a skunk!! Some people will place poisoned food inside the trap, however, we do not recommend that. It is a hard way to die and really is animal cruelty.

The raccoons had invaded our attic so we thought the simple thing to do was to trap them, take them out to the country and let them go.  Well, we were able to trap the two young raccoons easily enough. There were two babies that were now old enough to travel and did not know the ways of the evil world and were easily lured into the small animal trap. We placed the trap on the roof near the entrance to the den and within a few hours trapped one after another.

The Parents are Smart

The parent raccoons were another matter. They obviously had experience and may have learned from the plight of their young, however, there was no way they were going to go into that trap. I tried peanut butter, cooked meat, vegetables, etc. We fed them a balanced diet, yet they would not go into the trap. In fact, they also stole the food. They are really smart and were somehow able to reach the food without tripping the trap door.

I even spread peanut butter along the far edge of the trap inside. They would reach through the side of the trap and scrape off the peanut butter as much as they could. But they definitely were not going to go inside that small animal trap. So I thought ok, the holes in the wire mesh of the trap are just large enough for the raccoons to put their paws through to get at the food I had placed in the trap. I bought smaller chicken wire and wired it to the outside of the trap where they were placing their paws.

Well, it worked in terms of the raccoons not being able to get at the food. However, they still did not enter the small animal trap. This was a real dilemma and I had spent $100 purchasing this trap and having no success. Well, it turns out that I was wasting my time. Even if I had been able to get rid of the raccoons, there are many dens in the area meaning there are more raccoons living in our neighborhood and once ours left more would just move in. After some research I found this to be pretty common.

If the Trap Will Not Work, What Were We Supposed to do

I was forced to abandon my trapping and call in the experts. They explained to me that the really only efficient way to get rid of them is to install a one-way door over the entrance to the den. Wait for two months to make sure the parent raccoons and the young have left. Then replace the trap door with permanent heavy gauge wire mesh to keep them permanently out. The two months seem like a long time. However, they are probably gone after two days and the experts are just making sure there are no callbacks.

We were also surprised to learn about the bylaws of our city and many others. They prevent the trapping and removal of raccoons. You can trap them, however, you can only legally take them a couple of blocks away from your house. Really, what good is that going to do? They will just return the next night and move back in. Also, other raccoons in the area can tell if a den is occupied or not. They will also move into the vacated den. So I had to agree that the best approach is to install the one-way door. Keep them permanently out of our attic.

They were gone in a matter of days. During the next winter I could track on our roof where they had attempted to re-enter without success. So I count

this as a successful exercise. One word of caution, you must allow the young to get out. The parent raccoons have been known to tear holes in the roof while trying to rescue their babies. Always make sure they all can get out. Who wants a dead animal stinking up their attic anyway. Yuk!

I was able to resell the small animal trap using Craig’s list. I did not get the full price of a new one. However, I was able to recover some money that I had spent. If you do decide to purchase a small animal trap make sure that it is a humane trap. Also that it is of solid construction. If you are successful in trapping a raccoon, these animals fight. They will claw and spit in an effort to get out and defend themselves