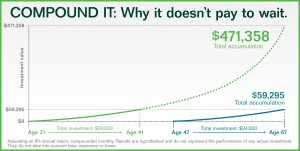 The following are some of the comments that came out of the study. One of the most significant items regarding retirement is the focus on living within their means. They had a savings plan for retirement. They have calculated how much they would need when retired and began saving for that eventuality.

Over 60% of the people surveyed we’re saving between six and 20% of their income every year. Of course there were some people who are saving more. Some people are saving less but the majority have savings plan in place which was in conjunction with any pension that they might be receiving.

Many of those people up to 44%, said they were comfortably retired. They had less than $500,000 in assets. This was a huge surprise to the authors preparing this report. It really means coming to terms with what they want out of retirement. Also how much money they will need during retirement. If you follow the 4% rule then someone with $500,000 in assets could expect to have $20,000 in income from theirr savings plus pension income. This may be sufficient for many however for many others they would require much more in savings.

Another important point about successful retirees is that they are prudent with her funds. Some people would’ve thought them as being frugal. But only 35% of the people consider themselves to be frugal. The rest said that they would spend enough to live comfortably. Obviously it is a question of managing income and expenses to everyone satisfaction.

For their retirement, many people felt they made big mistakes. While they were saving for their retirement was not getting into the stock market soon enough or getting out too late. Another concern was substantial healthcare costs. Over 25% are concerned about maintaining their standard of living while dealing with inflation, lifespan increasing and healthcare costs.

Many people have a car that is over two years old and have their homes paid for. They avoid carrying credit card balances and avoid borrowing money. They have a monthly budget and they stick to it and they have discipline as investors.