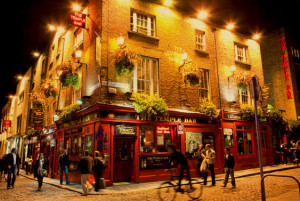 If you have been to Dublin Ireland, then you already know how nice a place it is and how friendly the people are. I have been to Ireland three times, twice on business and once for a sports tournament.  I had the opportunity to visit many of the pubs in downtown Dublin as well as go out into the country side and visit a castle that dates back at least 500 years. We took a city tour and explored the castle as well. My week on vacation there was really great and I would recommend Dublin as a vacation any time for people who are interested in the history of the Irish.

One of the times that I went to Dublin Ireland, I was bused out to a castle just outside the city of Dublin. Nortel Networks took us to this castle for a dinner evening of entertainment and camaraderie with other customers. We walked into the Castle Main ball room. We were served beer and wine and liquor. There were cocktail foods served as well. This room was as large as a two story home just on its own. The castle was really quite huge. In this particular room on one wall a set of antlers from a deer was mounted.

This set of antlers was at least 14 feet across. It had been dug up from one of the peat moss bogs on the property. The room was so large that these antlers really did not look out of place which gives you some idea of the size of the antlers and the room itself. They were huge and added a rustic look to the room which was amazing and enjoyable at the same time.

The room we dined in was large enough to fit 50 people comfortably seated at 6 or 7 tables with room for a harpist to play during our dinner. One of the guests had brought his wife with him and they got up to waltz to one of the tunes. It was all quite entertaining and very nice. The meal was excellent although my thoughts were so engrossed on the surroundings, I really do not recall what we ate.

We were allowed to wander around a bit so myself and another guest went upstairs in the castle. The stair well was well lit. But very narrow and the steps which were built of stone were well worn from all the years of traffic up and down these stairs.  This was an even well worth attending and I am so glad that I was able to attend.

This was the first time I had ever been to a castle. I have no idea if it was typical or not, but it sure was an impressive building. Castles were built as a place for the king or for local lords to live. They were also places were the local people could live and work.

They provided all kinds of goods to the castle owners as taxes. In return received protection from marauding bandits and other lords who might attack them. It was a tough life back in those days. Yet commerce and protection for one’s material items along with your life was in practice much as it is today.

We were bused back to Dublin later that evening after thoroughly enjoying this diversion from our day long meetings. Again if you ever have a chance to go to Dublin, it is highly recommended as a place to go.